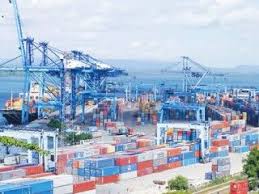 Ultra large cargo container ship EVER GIVEN ran aground in the Suez Canal on Tuesday 23 March 2021, reportedly due to strong winds and sandstorms, blocking the waterway.

Suez Canal tugs were working to free the 400 meter LOA laden vessel but wind conditions and its size of were hindering the operation. According to information from the Suez Canal Authority, the grounded vessel has been partially refloated and is now alongside the Canal bank. Convoys and traffic are expected to resume as soon as the vessel is towed to another position.

Traffic reportedly is blocked in both directions. There might be delays in the shipment and it’s unclear at this point how long it will take to clear up.